In the last few days and weeks, there have been a lot of rumors flying around about who the Seahawks might bring in next year to play at QB. It's that time of the year where talk is really the only thing you can do.  Things are starting to heat up though as the draft draws nearer and the idea of free-agency actually happening sounds more realisitic.

While we can speculate on who the Hawks might bring in to play QB next year, I think it's important to talk about what type of QB Pete Carroll really wants, and more specifically, what type of offense you can expect the Hawks to be running in 2011.

When Pete Carroll was hired last year, in pure Sinatra style, he promised that he'd do it 'his way'.

"I vowed, 'If this is the last coaching job I ever have I'm going down with the stuff that I want to be my offense,'" Carroll said at the time.

Well, after one year, that offense never really showed up and had no real identity, and you can surely take him at his word: he fired his Offensive Coordinator because of philosophical differences (pass-heavy play calling most likely the culprit) and has hired a new offensive line coach (Tom Cable) and offensive coordinator (Darrell Bevell) that he is more aligned with regarding his vision of the offense.

But what offense do they plan on running? Pretty much everything I read in the media these days have the Seahawks implementing a Holmgren Style West Coast Offense now that Bevell is here. Holmgren's style has been described as one predicated on ball-control; a high percentage passing game that sets up the running game.

Holmgren has said: "Often times a short pass will be substituted for another running play. It's easier. If you gain 6 yards on a run, what's Barry Sanders average per run? No one averages 6 yards a carry."

We all saw this for years when the Hawks were led by Holmgren. Does the arrival of Bevell mean more of that type of game? I'm not sure that will be the case. Rob Staton over at Seahawks Draft Blog, for one, has been skeptical about this notion from the very beginning and I agree with him. He brought very compelling evidence against it today in his new mock draft discussion thread when addressing the idea of the Seahawks drafting Ryan Mallett, a very immobile quarterback. I'll quote:


It’s assumed Darrell Bevell will bring a more ‘west coast’ or Holmgren flavor to the offense, but I don’t agree with that. He’s worked much longer with Brad Childress and Andy Reid who both utilised down field threats, big armed quarterbacks and mobility. Donovan McNabb, Kevin Kolb and Michael Vick aren’t Holmgren style QB’s yet that’s a system Bevell has been associated with. Minnesota drafted Tarvaris Jackson and Joe Webb and used a system more equated to Philly than Holmy.

But perhaps most crucially, they adapted when an ageing and much less mobile Brett Favre joined the team in 2009. You can make the point that ‘it’s Favre’, but they still adapted. There’s no reason why Seattle’s offense – which I still think will fit the desires of Pete Carroll rather than Bevell - cannot similarly adapt.

Does this mean that the Hawks prefer a mobile QB like Kolb or Vick over a pocket QB like Hasselbeck or Mallett? Were they just adapting to what they had available in Hasselbeck this past season?  Will they adapt if they think that Mallett is the best pro prospect QB in this year's draft? Perhaps. Staton also points out that in the past year or so the Seahawks have traded for Charlie Whitehurst, brought in JP Losman, and signed Nate Davis to a futures contract: all mobile and athletic quarterbacks. That's not to say that they could not execute their offense with an immobile one like Mallett (Matt Hasselbeck), but it seems as though what they are looking for may be a QB with a strong arm and good running ability.

Now that being said, on the other hand, Whitehurst doesn't appear to be the future, JP Losman is a free agent that hasn't been re-signed, Nate Davis was just released, and the front office has publicly stated that they want to re-sign Hass, a slow, immobile WCO QB, so the idea that they need or want a mobile quarterback to run their system could just be grasping at straws. We simply do not know yet at this point what direction they will go in.

The other problem with debating whether or not the Hawks will employ a 'West Coast Offense' per se, lies in the fact that if you ask five coaches to define a WCO, they will probably all give you different answers (for instance, Mike Holmgren taught Andy Reid his version of the WCO when they were both at Green Bay and both have added their own little tweaks since that time, each philosophy evolving over the years into disctinct versions). As Staton has pointed out, both run very different offenses with different types of QBs. So my point is this:  it is difficult to predict Carroll's true vision of what type of QB he wants and what type of offense he wants to run.  The on-field product we saw last year, though, was evidently NOT good enough, evidenced by the parting with Bates.

To get an idea of what Pete Carroll does envision this time around, it may help to take a look at the offense he so successfully employed at USC. I consulted a GREAT article written by Chris Brown of Smart Football that deconstructed the "Carroll Offense." I'll quote from there in the explanation:

First of all, he ditched Norm Chow's 'BYU' running schemes in favor of the Zone Blocking Schemes made popular in the NFL. He consulted with Alex Gibbs (name sound familiar?), the architect of Denver's ZBS that had so much success in Shanahan's Super Bowl years (Also, the mentor of Tom Cable). The Zone Blocking Scheme ditched the more conventional methods of counters, draws and traps in favor of a system that emphasizes utilizing double teams, getting better push downfield, and 'providing a nice mixture of power while giving the runner freedom to pick the the crease in the defense.'

He also got away from Chow's 'man-blocking' pass protection scheme in favor of a zone blocking method for pass-pro as well. Carroll's method emphasized gap control, ie, on blocking a gap in the line instead of a man.  In terms of the passing game, Carroll began to replace the methodical mid-range five-step drop passes favored by Chow (and I'll quote again):

Regarding the three-step game, one innovation was the "spacing" concept, but another was the concept of "packaged routes," where the Trojans put different route combinations to each side of the field, and let the quarterback choose which one he wanted to go to. The most common one was a combination of slants: to one side, was a slant and a flat route, which is good against "single-high" coverages (like three-deep zone), and to the other was double-slants, which is good against two-high, or two-deep zone. 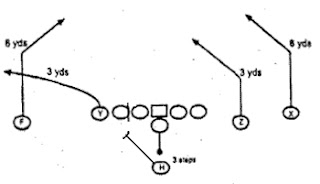 The other trends in the offense, evident under Chow but omnipresent once he left, were the rise of misdirection passes -- i.e. bootlegs, half-rollouts, and the like -- and an increased use of vertical pass patterns.

That lays out part of his passing philosophy. His run game is predicated on a big back used as a battering ram of sorts and a smaller, shifty back as a compliment. A more succint summation of the USC Offense is this (aptly laid out by Danny O'Neil):

1) Mix a combination of runners, one smashing and the other dashing.
2) Post up a big-bodied wide receiver.
3) Get a quarterback who operates more like the offense's point guard than its engine.
4) Move the ball liberally up and down the field.

Flash forward to present day and you can see several hints of Carroll's philosophy in the Seahawks' offense from 2010, but Jeremy Bates apparently didn't see eye to eye enough with Carroll to keep his job. For one, they didn't run enough, something that Carroll and the Hawks will surely do more of in 2011. Also, they didn't throw the ball downfield very often either. This could have been a symptom of several things: Hasselbeck doesn't possess the skillset to do so and/or turns it over too much when he does try it; or Bates did not call enough vertical passing plays as Carroll may have liked and also may have led to his firing.

Last year's offensive failings are where Tom Cable and Darrell Bevell come in. Cable has a history of transforming poorly performing lines into top-level rushing attack units - look at what he did in Oakland as an example: he took a offensive line unit that was near the league's worst and in one year had transformed it into one of the league's better squads; only three years later in 2010 they finished 2nd in rushing. Simply stated, it's cause to give me hope.

Bevell's philosophy is in line with Carroll's as well: use a smash-mouth rushing attack consistently, get your opponents to stack the box to defend the run, and then open up the field and take shots deep. In other words, build the passing game off of the run game.  Bevell's offensive strategy worked pretty well in Minnesota, and hopefully that success will transfer to Seattle.

In Pete Carroll and John Schneider's roster shuffling the past year, they've begun to put some of the pieces in place. They've got their fire and ice rushing combo in Lynch and Forsett/Washington. They have their big-bodied receiver to post up in the end zone in Mike Williams. They may bring in another big-bodied receiver in next few months to compliment Williams as well. They don't, however, have a real QB in place to operate the offense, and no real plan has been revealed as yet.

It's a little unclear as to what direction they will take it. Some think they will trade for Kevin Kolb or Carson Palmer. Some think they will re-sign Hasselbeck and draft a young QB like Ponder or Locker. Some think that Mallett may be the future at QB. Will it be a mobile QB with a big arm or a poised pocket passer with sub-par mobility? It seems to me that Carroll employed both types while at USC. Leinert was not especially mobile (5.1 40yrd run at combine) but had great success in the system. So did John David Booty (4.97 40) and Mark Sanchez (4.9, 5.0 40).  Palmer was quite mobile (4.65) and had so much success in that system he was the overall #1 pick.  To me this says that it's hard to judge what type of QB Carroll needs based on their speed, because he's had great results with all different types of athlete. In any case, hopefully we'll find out soon enough who face of the franchise at QB will be.

In the next few posts I'll look at a few different options the Hawks may be pursuing at QB.  Carson Palmer and Kevin Kolb are a couple of names that have been thrown out there for trades, as well as Christian Ponder, Jake Locker and Ryan Mallett in the draft.
Posted by Dan Kelly at 10:50 PM

The Seehock Blog is a Seahawks Blog (did you see what I did there? I spelled it differently). It was created in February 2011 to provide commentary, analysis, links, and opinions on the Seattle Seahawks.