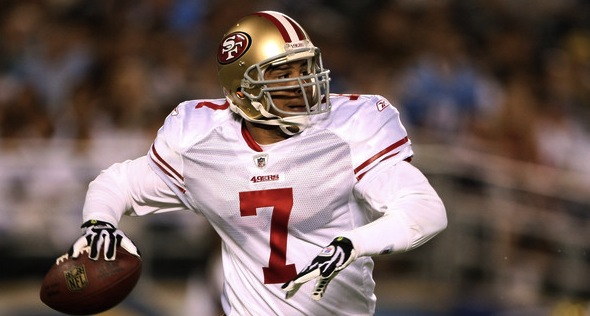 Seattle signed QB Nate Davis to a futures contract back in early January and I remember being really excited about it.  As someone that actually really does enjoy the preseason (getting to see future star players get out there an compete is interesting, remember Forsett lighting it up a few years back?), I remember watching Davis with a lot of interest.
Of course, last year, he was playing for the 49'ers so didn't get to a huge amount, but there seemed to be a lot of talk about his arm and his playmaking ability.
The 6'2" 225 lb Ball State Quarterback entered the draft after his Junior year in 2009. A legendary character at Ball State, he led his team to a 12-0 start in '08 before they lost in the MAC championship to Buffalo.  For a great anecdotal look at his college career, check out an article by Slate Shale here.

He was originally a fairly highly touted prospect whose stock fell precipitously because it was revealed that he had a learning disability, had ball security issues, and tended to grip the ball strangely.  He still remained a mid-round prospect though, going into the draft.  The reason why?  Taken from the NFL.com Combine analysis page:

With the exception of height, has all the physical tools scouts are looking for. Quick setup and delivery. Over-the-top throwing motion with an efficient release. Very good arm strength. Legitimate NFL accuracy to all levels of the field, including the long ball. Sets his feet and can drive the deep out from the opposite hash with ease. Good touch in the intermediate and deep areas.

Throws a catchable ball with enough loft to allow his receivers to catch it in space and create yardage after the catch. Good mobility in the pocket. Has enough elusiveness to buy time and has a good straight-line speed for the position to take yardage when the defense gives it to him. Good leadership intangibles. An ascending talent with natural tools worthy of development.

Rob Rang, one of the more respected draft analysts out there, had him highly rated as well.  However, only one team, the Colts, showed up to his pro day, and his stock subsequently fell.  Rang stated at the time:


I believe he is among the best deep-ball passers of this draft and a legitimate starter candidate if he is given time to sit on the bench and develop in a more pro-style offense.

There are certainly concerns with Davis. His lack of height and well-publicized learning disability are chief among them. I generally believe the Wonderlic is an overrated component of grading prospects, but at quarterback, it is important. Should Davis have scored poorly on the test (as is rumored), I can understand why he might be dropping. I was not particularly impressed by Davis during the interview process at the Combine and do not anticipate that teams were either.

However, considering the lack of talent among this year's quarterback class and the lengthy careers of past quarterbacks whose greatest asset was the long ball (Jeff Blake, anyone?) Davis remains a quality mid-round prospect with significant upside.

Then Forty-Niner General Manager Scot McCloughan, now the Seahawks Senior Executive of Player Personnel, saw something in Davis and drafted him in the 5th Round.  For the record, McCloughan is no slouch:  He was with the Hawks as director of college-scouting when they built a Super-Bowl team from 2000-2004.  After that, as GM of San Francisco, he was integral in putting together the talented and deep roster the Niners' now possess.

Davis grew to become a fan favorite by playing well in the preseason and demonstrating his ridiculously strong arm and athletic ability.  He led the 49ers to come-from-behind, game-winning touchdown drives against Raiders and Cowboys. Against Oakland, he methodically brought San Francisco back from a 14-3 deficit at the beginning of the fourth quarter, going on to win 21-20. Then against Dallas the next week, Davis led the Niners' to two late touchdown drives, capped off with a 10-play, 88-yard drive to seal a 20-13 victory.

During the regular season, with the inconsistant play of Alex and Troy Smith, fans, via twitter and message boards, begged their team to give Nate a chance. They would not relent. Both coach Mike Singletary and offensive coordinator Jimmy Raye criticized Davis' work ethic and dedication.

They said they were disappointed that Davis didn't make bigger strides during the offseason.  As a result, he stayed on the Niners' practice squad all year.  He barely practiced at QB there, instead playing Tight End most of the time.  While there's probably some credence to the coaching staff's reservations about Davis, I tend to have doubts about what was going on behind doors.  After a tumultuous season of QB catastrophes for the 49er's, I can't say that I completely trust Mike Singletary's ability coach and/or get the most out of the QB position.

As McCloughan departed the 49'ers, so departed Davis' main supporter.  Davis was not signed to a futures contract, and thus was available to other teams.  McCloughan quickly re-joined the Seahawks, and so followed Nate.

Does Davis have a future with the Hawks?  That obviously remains to be seen, but I like the fact that they are exploring all the options on the table.  For a guy that has such an upside and potential ceiling, I'd love to see the Hawks give him a year or two to prove that he has the makeup to become a starter one day.

I came across an article in my research and it gives me a little hope that Davis could be part of the Hawks for a long time.  Written by Matt Maiocco during the offseason last year, it details former NFL Scout Dave Razzano.  Razzano has been a part of five Super Bowl teams, has a track record proving his ability to accurately judge talent, and he had some strong opinions about what was going on at QB for the 49'ers coming into last season.

He strongly believed that Alex Smith is a non-starting type player and that Nate Davis has the tools to be a starter in the league.  It will take some time to find out if he's right about Davis, but as for Alex Smith, he seems to be pretty on the mark.  Smith played inconsistently in 2010, publicly clashed with Singletary, was benched, re-gifted the starting job, and ultimately failed to produce wins. And, he sure didn't make many fans this year in San Francisco; at one point fans chanted for third-string David Carr to replace him.

In Maiocco's article though, what Razzano said about Davis is most striking:


When I evaluated him, I thought he was the same guy as Mark Sanchez.  I thought they were very similar. But you have to put a guy on the field and let him play. There's a reason Ball State was, like, 12-1 or 13-1 for the first time ever. And now they're back to winning two games. That guy was a heck of a quarterback.

They might say, 'He doesn't learn this or that.' If they just handed him the keys, that's their answer. He'll make mistakes, but he won't make the same mistake twice. This kid made every throw imaginable. It wasn't a short-passing game (at Ball State). There would be guys in his face and he'd roll out, man, he hit guys on a 30-yard freakin' strike between defenders. The kid was unbelievable. I knew he'd fall (in the draft) because in the spring all that garbage (Davis' learning disability) comes in.

Pretty high praise from a guy that presumably knows what he's talking about.  Of course, you have to take it with a grain of salt, but my guess is that Davis merits some of this praise.

Whether Davis makes the 53 man roster will be a big story I watch this next fall.  I doubt that he'll have much, if any, impact this coming season, but I am intrigued none the less.

Check out a compilation of his 09 Pre-Season.


Nate Davis demonstrates his rocket arm:  Collinsworth is the best commentator ever, by the way.

The Seehock Blog is a Seahawks Blog (did you see what I did there? I spelled it differently). It was created in February 2011 to provide commentary, analysis, links, and opinions on the Seattle Seahawks.